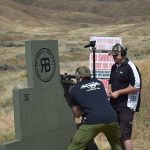 I started hunting a little later than most. Growing up on the Washington coast I was obsessed with all things fishing. My enlistment in the Air Force found me stationed in Texas and that’s where I discovered hunting. Being a financially challenged Airman I called my Dad and told him about my new found obsession and asked if he had a rifle I could have. He was coming to visit … END_OF_DOCUMENT_TOKEN_TO_BE_REPLACED