Menu
Log in
Register
You are using an out of date browser. It may not display this or other websites correctly.
You should upgrade or use an alternative browser.

Location
Foot of the Big Belt Mountains near Townsend MT.

Well as some of you know I hold a sweet spot in my heart for the old lever guns. Not so much the newer rifles, but the real McCoy's like my 1873 Winchesters and my old 1895 Marlin. The Marlin is chambered in 40-82 which was the "Flat Shooter" in the late 1800's. It was born from the 45-90 which was the big brother to the popular 45-70. They simply took the 45-90 and necked it down to 40 cal for the velocity. The most common load back then was with 260 grain cast bullets. But mine really liked the cast 300 grain slugs so I worked up a load with those over a stout charge of powder.

Today was the first time I have hunted with the old gal. I figured it would be fun to try to fill my deer B tag with this old 135 year old rifle and open sights. My self imposed shot distance limit was 100 yards. She will hold a nice tight 5" group at 100. So i got up on this nice adult doe and slowly squeezed the very heavy trigger until the old 40-82 barked with a puff of smoke. That sent the 300 grains of cast lead toward the doe that was broad side at 80 yards. I heard the bullet impact and then wiz and wirr off into the distance, so I knew I got a full pass through. The deer jumped and kicked in the standard "I'm hit" deer fashion. I could see she was leaking a ton as she bound off about 75 yards. Then she staggered, fell , and gave one kick.

It was a really fun hunt and the back straps will be cut into 4 pieces, wrapped with bacon and garnished with pineapple rings for smoking on the Traeger. I have no plane to retire this old rifle she has earned her place for the in close work. 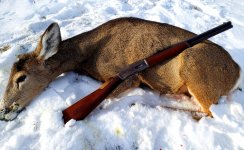 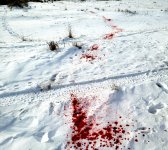 That's awesome Broz!! Congrats on a very successful hunt with a great historical weapon that's still filling the freezer. If only it could talk and tell you how many freezers it has filled.

Jeff that is so awesome! Thanks for sharing

Yer conjuring the old ways with that lever action Broz. I’d love to live that experience every day as they did back then. Very cool and congrats.

Awesome hunt with the old girl!

Way cool Jeff! I think you're right. Stevie could easily follow that blood trail. Like mentioned before. If only that ol girl could speak and tell the stories of hunts past.

Location
Foot of the Big Belt Mountains near Townsend MT.

OSOK - Crash said:
Way cool Jeff! I think you're right. Stevie could easily follow that blood trail. Like mentioned before. If only that ol girl could speak and tell the stories of hunts past.
Click to expand...

Yes, I have a few 1873 Winchesters too that I would love to hear their life stories.

Hunting with them is a lot like hunting with a bow only a bit more accurate and forgiving. Like bow hunting these type of hunts keep the haters of long range at bay when they say "you can't get close"
O

Thats great! My boys middle name is Winchester and I found a model 94 made in 1957 for him two years ago in 30-30. When he turns 16 he will get it, nothing says classic history and heritage like a lever gun.

Was wondering when we were gonna get a story of you putting the smack down on a critter with one of your lever guns. Congrats Jeff and Thanks for the story. And yes. That’s one heck of a blood trail.

There’s definitely something about hunting with the “old forgotten” irons that puts a different smile on your face. Kinda makes you giggle a little. Good work!
G